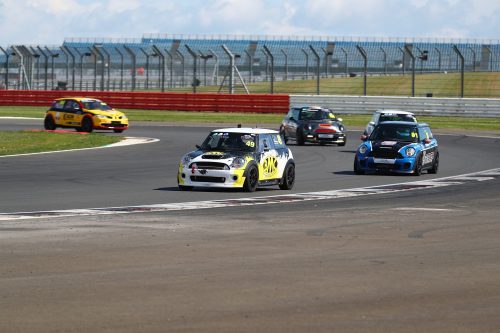 Round two of the CCSC Turbo Tin Tops Series steered us to Silverstone Circuit. Racing around the International circuit meant we were stationed in the impressive Wing pit complex. It also means that regardless of the weather conditions, it is one breezy pit lane, and given that the beginning of May wasn’t particularly warm, it certainly made conditions on circuit somewhat interesting.

After our decidedly average showing in the Snetterton opening round we were keen to see what progress we had made in a day’s testing at the Castle Combe circuit. Ahead of the test we had swapped back to KW shock absorbers. These have much greater degree of adjustment and throughout the day we were able gradually dial in the car’s handling to allow the drivers to carry as much sped as possible through the corners, a key factor in getting a good lap time. The everyday pressures of our day jobs meant we were unable to test at Silverstone prior to practice on race day.

Although windy for the duration, weather conditions did change dramatically throughout the day, with rain, sunshine and even hail each making an appearance. As you can imagine, this really challenged us in terms of car set-up. The cold weather meant it was impossible to get the tyres up to working temperature. But it was the same for everybody so we had to do the best we could.

Sean went out first during qualifying, before handing over to Daniel for the second half. Only 30 minutes was allowed for practice and so both drivers had to get on it right from the get go. The car’s handling had been transformed by the revised set up and gave them both enough confidence to push the envelope. Daniel set the best time of 1.18.296 which gave us 3rdin Class D and 4thoverall, very gratifying and a massive improvement over our first race of the season where we qualified 18thand last! Equally impressive was Sean’s qualifying session where he set a best of 1.19.868. Not bad for a driver who hasn’t raced for 11 seasons! Daniel was not overly impressed as you can imagine.

After practice and drivers de-briefing we had time to practice pit stops. The driver change-over is pretty straight forward in principle but in practice it’s fraught with pit falls. Pit crew getting in each other’s way, not plugging in the radio jack properly, twisting seat belts and the driver stalling in his haste to re-join the race. After several practices we got down to 30 seconds from flash to bang. Good enough but plenty of room for improvement.

Come the start of the race, it was Sean who climbed aboard first of all, ready for 40 minutes of action. An excellent star saw him take the Class D lead immediately, to lead the way during the first lap of the race. He was soon overtaken, however he remained in the thick of the action for the rest of his stint. The BMC Mini looked set for a strong finish, when we led for a further five laps part way through.

The weather by this time had deteriorated badly. The air temperature had dropped to 6 degrees and spots of rain had become a heavy hail storm. Lap times had increased by over 10 seconds for all the front runners.

At nineteen minutes Sean was called in. A poor pit stop cost the team any chance of a good result. Daniel, once back out on circuit, did his best to recover the situation ahead of the chequered flag. Forced to navigate his way through patches of standing water from the hail storm, a mid-stint rain shower and then sunshine and blue skies, Daniel managed a half spin but still hold on to claim  fourth place finish in Class D for the team.

After the race Daniel said “We are very disappointed with the result as we had the car today to deliver and we could have achieved a class win, if not overall. Everything up to the pit stop was in great shape. We will go back now to sort the driver changes out and do better at the next round.  Considering the difficulties, we have had already this year, from the testing crash at Donington Park to a rebuilt car, and given our lack of testing time the team are doing a great job under a lot of pressure. The championship isn’t over and with more development to come we are getting closer to the front. The pace is certainly there and we are learning more about the car with each round.”

Next stop – Oulton Park in Cheshire on 27thMay. Once again, we will be heading straight into qualifying, but Oulton is a circuit we know well. Let’s hope our experience eclipses the need to test.