There was a real sense of anticipation in the Team leading up to the Thruxton race. Uniquely Thruxton has long fast straights, sweeping curves and three critical corner complexes that reward the best drivers. Walking the circuit late Saturday evening with Shields and Nigel it became clear it is a far more technical circuit, from a drivers point of view, than it appears to the casual observer. 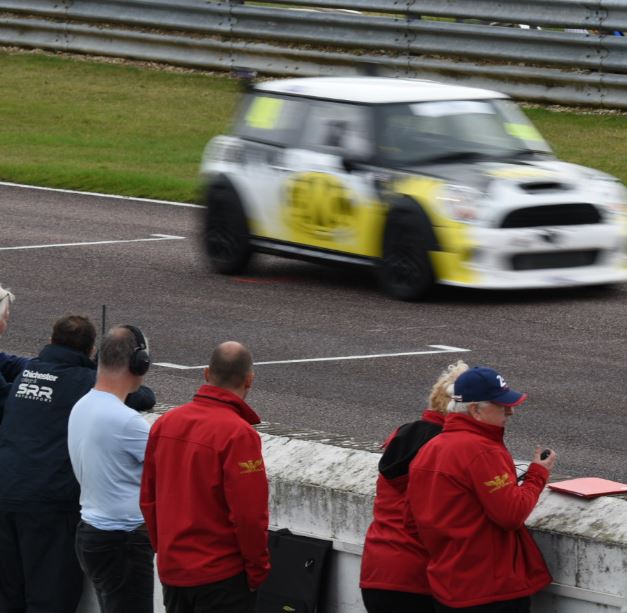 We arrived late Saturday afternoon and set up the pit tent and unloaded the car. The weather had been warm and sunny all day but the forecast was for heavy rain. Fingers crossed the weatherman had got it wrong.

Arriving at the circuit it had stopped raining but more was on its way so we set the car up for a wet practice. There was a problem, our tyre of choice the Nankang AR-1, was out of stock with every dealer in the country! The tyres we had would be ok but not ideal in these conditions. During our pre-scrutineering check we discovered the high intensity rain light was not working. How can such an apparently simple fault take so long to fix? So long in fact that we missed practice and had to qualify out of session which meant both Shields and Sean were only allowed three laps each and would line up in last place on the grid.

Shields made his first standing start! All his American races employ rolling starts but I think he’ll be lobbying for the European way of doing things in future. After the first lap he’d made up six places! A further place in the next lap and then he set about catching the faster cars. Lap five saw him move up to seventh, lap six he was sixth and lap seven saw him in fifth. Now he had to catch the front runners. With excellent, consistent laps all in the 1.30’s he closed to within sighting distance of the next car but the time for driver change-over was here. He was doing such a good job we left him out there to gain track position as others were now pitting for their change overs. On lap twelve Shields brought the car in from third position overall! His best lap being 1.30.814.

Driver change-over was executed in a great sub 30 seconds and then disaster struck! We’d served our 30 second success penalty but the car wouldn’t start! The crew tried a bump start to no avail. Then we discovered the ignition key had become dislodged! This has never happened before. All of Shields good work was gone to waste unless Sean could pull his finger out. Re-joining in P12 the field was miles ahead he took half a lap to settle in and then he knuckled down to catching up. As his confidence in the car and his knowledge of the circuit grew lap times came down from the 1.32’s to the 1.31’s and then the 1.30’s. His best was 1.30.057 just 0.286 seconds behind the best.

We ended the race ninth overall and second in class. Leaving the circuit we were all rather despondent as we had arrived seriously looking for an outright win. On reflection there were a lot more positives than negatives. Working with less than perfect tyres both Shields and Sean drove their socks off, the BMC Mini was very strong in speed, handling and braking and the Team, faced with the problems stuck at it and got the job done without ever easing up.