Woodard Racing enjoyed a successful outing at Oulton Park yesterday (27thMay) for the third round of the Classic Sports Car Club (CSCC) Turbo Tin Tops Series. Surrounded by mixed weather conditions all day, it certainly made things interesting, but the team was where it needed to be as the chequered flag fell.

Despite not being the biggest fan of the Cheshire-based circuit, it was Daniel Woodard who took to the circuit for the first half of qualifying. In dry conditions he banked a few laps before handing over to brother Sean Woodard.

During Sean’s stint the black clouds that had been lurking for some time turned to heavy rain, limiting the lap times somewhat. Despite the weather, Sean proved to be one of the quickest drivers in wet conditions. After 30 minutes of qualifying, the pair secured a 10thplace grid slot for the 40-minute race. 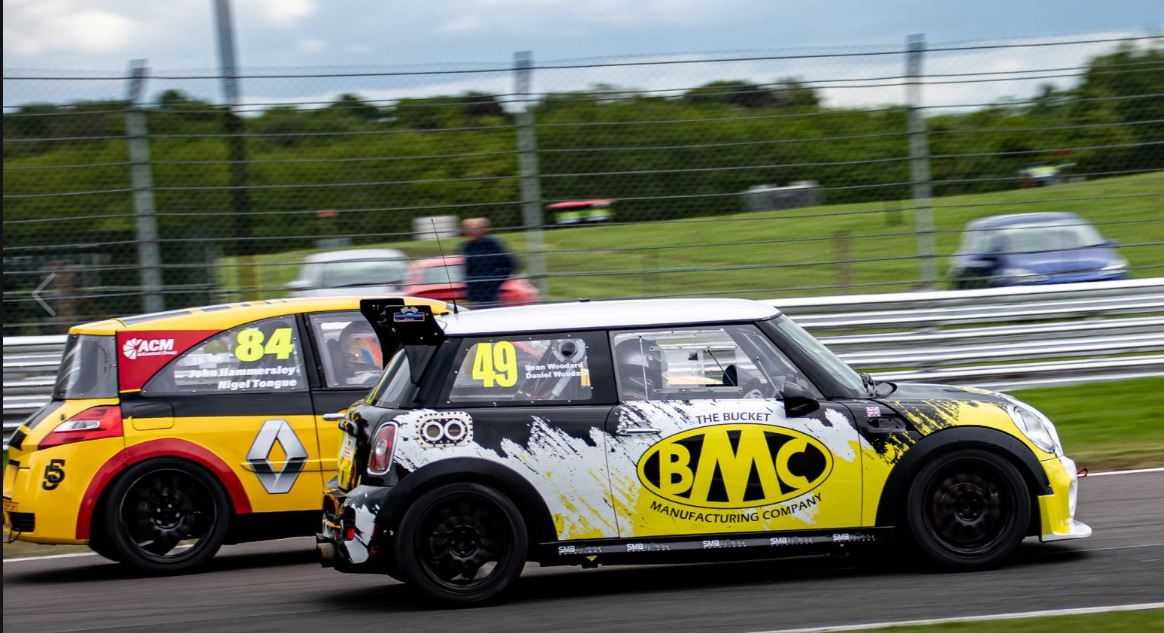 As the weather changed repeatedly throughout the day, the time came for the start of the sole Turbo Tin Tops outing. Due to the weather there had been a lot of technical talk prior to the start of the race. Unaware of whether we would be facing a wet, dry or mixed weather race, the team discussed tyre pressures and car set-up at length, to ensure the correct decision was made.

With all conversations haltered, Daniel jumped aboard the team’s JCW Mini Cooper R56 for the opening stint in dry conditions. A recent forecast check had seen rain due to hit us around 3pm, after the race had finished. However, knowing how strong he was in the wet earlier in the day, Sean was praying for rain during his stint.

A flying start saw Daniel immediately swap his 10thplace grid slot for 5thplace by the time he reached the first corner. Despite a trail of oil running down the Avenue towards Cascades, he managed to lap some six seconds quicker than his qualifying pace. His confidence in the car shone through as he made his way to a strong class leading position and second overall before making the mandatory pit stop.

Everything appeared to be on the side of Woodard Racing at Oulton Park. As Sean jumped in for his stint, the heavens opened once more. Confident in tricky conditions, he began to set some of the quickest laps amongst the field once again, enabling him to close the gap to those ahead of him.

Despite rejoining from the pit stop in second place in class, Sean soon made his way back into the class lead. As he exited Deer Leap for the final time to see the chequered flag there was an immense cheer from the rest of the team in the pit lane, having claimed a tremendous class victory and second place overall.

Commenting on the victory, Sean said: “Today a dream of mine came true. After being involved in motorsport for many years as a spectator, marshal, mechanic and driver I have now won a race with my brother, Daniel.”

It was a very proud moment for the whole team, particularly Sean and Daniels father, Peter. Hard work does pay off.