The Team’s first race in mainland Europe this season took us to the famous Dijon-Prenois circuit. The journey from our Herefordshire base was a long one and called for a 4.00am start on Thursday. Six hundred miles later we arrived at the circuit with no real dramas on the way. The weather had been pretty good on the way down, dry but overcast. We set up our paddock tent, unloaded the car and set off to find our accommodation. A task easier said than achieved (note to self; I must improve my spoken French!).

Friday was for practice and qualifying. It was raining lightly as we prepared and Shields and Amy arrived in good time, having driven down from Paris the previous day. We had all studied videos to gain as much understanding of the circuit as possible but none of us were expecting such elevation changes. For our session the light rain increased to downpour and there was a great deal of surface water on the track. The first corner is long and sweeping and sucks drivers into thinking they can go faster. It’s one that requires delicate throttle control if a spin is to be avoided in these conditions. Shields tested the levels of adhesion here on his out lap. The marshals soon had him out of the gravel and on his way again! Cars were spinning off everywhere in these most difficult conditions but by the end of the session we had set the fastest in class, a 1.58.949. Everything on the car was checked ready for Saturday’s race and then we went back to the house for dinner and an early night. 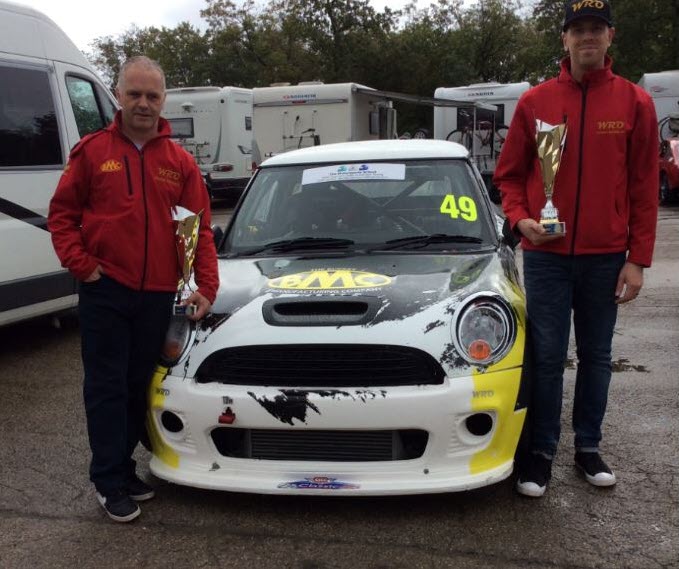 For this event the Club had amalgamated several different series and there were Caterham’s (with very wet drivers!), all types of BMW’s, Lotus’s, Jaguars, Peugeot’s (of course) a Clio and even a couple of TVR’s. It was going to be interesting!

Just as for practice the rain was torrential for the race. Shields got a good start but was boxed in by cars less nimble than the BMC Mini. There were cars spinning at every corner as the rain got heavier. We had lost places initially but Shields was making up time as he got into his rhythm and on lap 6 set the fastest lap in class, a 1.51.271. A mega effort from him! We were now back in the class lead as the pit stops started. By lap 9 we were seventh overall and it was time for the driver change-over. From pit entry to pit exit we took 82 seconds, not good enough and we were back to second in class, 17 seconds behind. The treacherous conditions caught more cars out and Daniel was frustratingly stuck behind the safety car for five laps and unable to set about re-taking the lead. Once released he did make up time, but the leader was doing a good job of staying ahead and there was just not enough time left before the chequered flag. Class P2 and 10th overall, disappointing.

For the race on Sunday we put Daniel in the car first and it paid off handsomely! By the end of lap 1 he had taken the class lead and was up to 9th overall. The rain was even harder than Saturday and driving conditions worse. On lap 4 Daniel had a half spin and lost the lead. The leader decided to pit early and on lap 5 we were back in the lead. Daniel was doing a good job so we left him out until lap 10. A much better pit stop (66 seconds, pit entry to pit exit) got Shields into the car and on his way. He very quickly got up to speed and matched or bettered the leader’s times on most laps. On lap 16 the red flag was thrown. The leader had spun off under pressure from Shields and we had won!

Sometimes you inherit a race win but we earnt this one. Great driving by both Daniel and Shields, a much better pit stop, plus a good set up of the car meant the whole team got their just rewards. Our first win with Shields in the car!