Having not been able to gain an entry to this month’s Turbo Tin Tops race at Spa which is massively over-subscribed, we jumped at the offer of an entry to the Donnington round of the Britcar Championship. It was great to be back amongst old friends and the Britcar team, led by Claire Hedley, do such a great job of putting on endurance races. 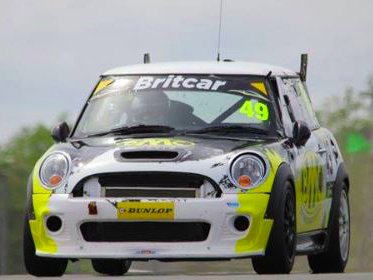 The weather was hot and sunny, as we readied for scrutineering. After a discussion with the Dunlop technicians we set the tyre pressures and stiffened up the suspension prior to practice. We went out with just 25 litres of fuel and waited to see how our BMC MINI would measure up against Rob Bakers indecently quick Smart S2 and some of the class 4 cars.

Daniel started slowly taking his time to settle in and see how comfortable he was with the set up. One of the biggest changes was being overtaken by much quicker cars. Ferraris, a McLaren, Porches and Ginetta’s meant he had to keep a careful eye on what was coming up behind whilst at the same time finding his racing line and braking points. He dialled himself in and each lap saw an improvement in times. The best, a 1.24.273, set on lap 5, gave us pole for class 5 and was less than a tenth off the class 4 car that would be alongside us on the grid for race 1. The Smart S2 had suffered terminal turbo failure and would not be racing. Disappointing.

In depth analysis of his qualifying laps by Daniel and our driver coach identified several areas where improvements could be made, and time gained in the race. While they were studying the data, we got on with prepping the car for race 1. The temperature was climbing steadily and by the time of the race setting tyre pressures was going to be critical and would be left to the last possible moment.

The race itself had become a test session for us as we had no class 5 competition. On lap 13 we pitted when the course car was deployed while a stranded car was recovered. A mandatory 90 second stop gave us time to adjust the now hot tyre pressures before sending Daniel back out. Daniel was getting more speed out of the car and set a best of 1.21.1 on lap 15. Other competitors were having their own dramas and come the end of the race the BMC MINI came home 15th overall and 1st in class.

Race 2. For the last few laps of race 1 Daniel had reported a strong vibration coming from the front of the car. We had checked it over and decided it was caused by a wheel imbalance. Dunlop rebalanced it for us and we thought that was that.

As soon as the race started Daniel reported the same problem and I was pretty sure I knew what it was and so he pitted the car and withdrew from the race. MINI’s and CV joint failures go hand in hand.

Two races and two first in class. Not bad!